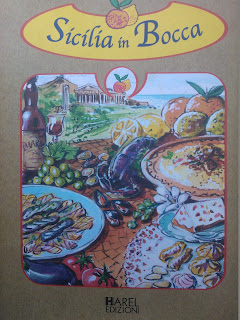 Every good cook book has a story behind it, and this one is no exception... Sicilia in Bocca by Antonio Cardella, received as a wedding gift from savvy Tuscan friends years back. It’s printed on yellow-tinged paper with a rustic feel to it, like the placemats you get in trattorias. The illustrations are witty, the prose has socio-political undercurrents (the author prefaces the Starters section with a caveat: Don’t get the idea that Sicilians are used to anti-pasti; not so long ago hunger was the norm. “It is not easy to change a state of forced abstinence into one of cheerful guzzling.”) And the recipes are in dialect, Italian and English – with creative translating from the original and a good dose of Sicilian wisdom and proverbs. I need to consult all three version to make sure I’m following the recipe correctly J

Yesterday I went to my libraio di fiducia, my favourite bookseller, Filoramo, and asked him if he had a copy. I wanted to give it to an American friend who is getting married.
“Ah,” said Filoramo. “A fabulous book. Sadly it’s no longer in print.”
And why not?
The publisher did a low print run at first, thinking only a few copies would be sold - to the more discerning tourist. But Filoramo called the publisher after a few days:

“I’m all out of that book. Give me 50 more.”
“I only have 20 copies.”
“Well, bring them here!”
It sold out so fast that soon the publisher was making regular trips to Milazzo and Taormina with his carload of recipes. And then, as can happen when money enters the equation, the thing went sour. Someone tried to cash in on the success, with another book called Isole in Bocca; they were sued for copyright infringement, and the result of the legal fallout was that Sicilia in Bocca could be printed no more.


“The greatest shame,” said Filoramo, with heartfelt lament, “is that I didn’t keep a copy for myself. So treasure yours.”

Cardella suggests that every recipe, being a creative act, is inherently incommunicable – pretty much in line with my mother-in-law’s culinary gems. “Oh I just throw in a handful of this, a pinch of that”. Everything is “a occhio” – an expression that means a rough estimate, but in terms of cooking connotes instinct and how you’re feeling that day.
Of course, it is so much more than a mere recipe book. The author takes us on a reconnoitering stroll across Sicily: through mountain towns of Saracen origin such as Geraci Siculo (“… [whose] inhabitants, very affable to visitors, live the life of a little mountain village”) to fish markets, where “[F]oreigners are always cheerfully amazed at the crafty and noisy expedients used by fishmongers in order to compel the hesitant purchaser to buy something”.
Recipes are pitched with hearty reverence, from “Agghiotta di pesce spada”, a Messina speciality, to Pasta with sardines, and wild fennel: “[T]o find it, it is necessary to go to Sicily as it does not exist anywhere else”. Everyone who has contributed to making Sicily what it is gets a mention, including musicians, writers, artists and demagogues – and not forgetting legendary shapers of Sicily such as Aeolus and the Cyclops. Cardella honours centuries old traditions and gives us his take on Sicilian history: and this is the book’s passionate achievement.