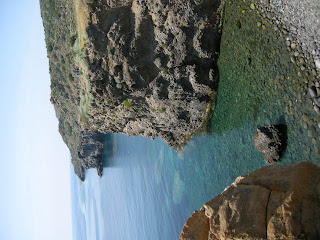 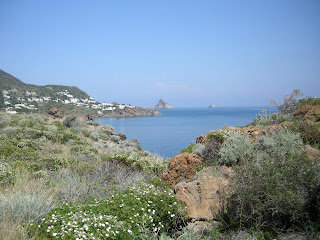 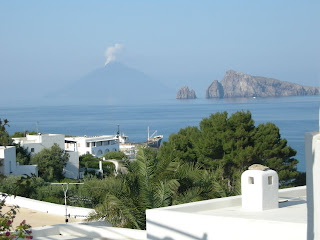 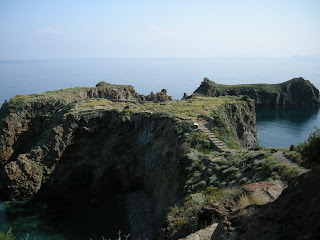 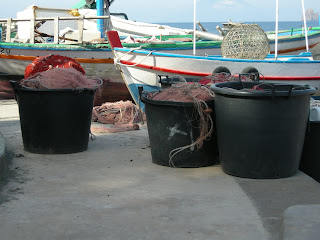 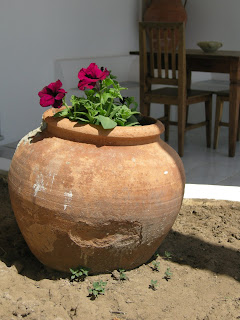 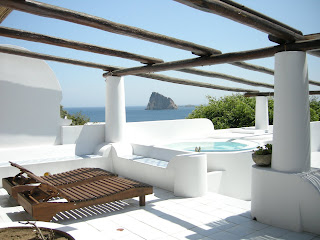 Posted by Penelope at 4:21 AM No comments:

Well, our joy in finding a competent cook is, of course, of course, now tainted with a little doubt as to his intentions. You can never take anyone at face value in this place. He’s only been here two weeks, that is, he has only been working for us for ten days, but already there are a few things that don’t quite figure. Or that hint at certain things. Especially one particular instance: on Sunday night he asked my husband could we lend him some money. Some money? Says my husband, thinking he perhaps wants an advance on his first salary to help with settling back into Sicily. But we are talking along the lines of €10 000. EH?????!!!!! As bold as brass, he explains he’s in a tricky situation because his money is all tied up in Germany, but his sister needs some money badly at the minute and can we help out. I am blown away. Amazed. Has he not seen that the restaurant is practically empty on weekdays? Or does he actually think that the fact that the place is packed on Fridays and Saturdays mean that we are rolling in it? Has he not contemplated the 6 members of staff plus the bands that we have to pay at the weekends? And the overheads and the suppliers and the fact we’ve only been open a year? Can he not approach his brother or children in Germany for cash? I think he is off his trolley.

Mio marito diplomatically tells him he’ll discuss it with me but thinks it hardly likely. When he gets back to him with the news that we are not able to ‘help him’, he tries for €5 000!!! ‘Can you not give me something at least?’ he says, expectantly. No embarrassment. It’s as if we are inconveniencing him by not stumping up the dough for his dodgy dealings. Who knows what he needs it for. My mother-in-law reckons, from some of the noisy phonecalls she has overheard, that his sister may be purchasing a property, in which he will in also invest, and that they need the deposit money. He has been declaring that he has – or will have - €300 000 to invest here in Sicily, once he passes the sale on his restaurant in Germany. Now that the castle has reopened after its two years of restructuring, he thinks we need to capitalise on this by opening during the day, and even running a kebab and sandwich joint for tourists. We had a short circuit in the kitchen the other night and he slapped his hands on the fridge doors; ‘It’s these fridges which consume so much energy. When I’m in Germany I’ll get you some decent fridges: small ones that we can stick in under the work surface and then use as worktops.’ No need, I reassure him, it’s not the fridges, but the bad wiring that causes the short circuit now and again. I notice that the wine glasses are not shiny as usual and ask is the dishwasher playing up. But my mother-in-law says they are using a new detergent and so writes down on the shopping list the old product they used before. Our cook declares that all glasses should be washed at the bar anyway, that we could purchase another small, powerful dishwasher for the bar for €500. He goes on like this all the time apparently, making sweeping suggestions about improvements (expensive) and investments (on our part) to be made. He even hints that he and my husband go into partnership, that his rich Russian friend will soon be arriving from Germany with masses of Euro to invest (‘his house is made of gold, pure gold, real gold, I tell you!’) and then we’ll all invest in new projects together, like one big happy family. In fact, the language he uses with my husband, is all, ‘fratello’ (brother), ‘io ti voglio bene’ (I really like you) – from the minute he heard his voice on the phone he knew he was a good guy he could trust - and all his kind of blether. We were looking out at the piazza in front of Pachamama one evening before work, with the palm tree and the old church – the lovely old church façade that many tourists stop to look at, but which is closed since it hasn’t been restored. It is very picturesque, in that decrepit, Sicilian way, especially at night with the soft street lighting. ‘This piazza is bellissima,’ he declares. ‘I mean, look at this church; do you know if it is for sale?’ It is hard to keep a straight face. This is a seventeenth century church we are talking about.

‘No one who has been his own boss for thirty years can make such a change and easily adapt to working for someone else,’ says mia suocera, shrewdly. She is certain that we are just his ‘appoggio’, his initial support for getting connected again in Sicily. In fact, he often pops down into the bar area to see how customers are doing – more to get talking with them and networking than to see if they are enjoying his food. He’s putting out feelers for potential money-making schemes or partners, sources of funding and who knows what ventures. He gets despondent and bored on weekdays and Sundays when orders come in for panini and piadine; perhaps he is beginning to realise that he will make no fortune through Pachamama.
Posted by Penelope at 4:00 AM No comments: