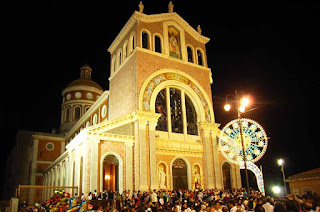 My favourite Madonna of all the multitude of Virgin Marys venerated by the Sicilians, is the Black Madonna of Tindari.

Her feast day takes place on 8 September, but the festivities go on all weekend: these include the annual pilgrimage to her Basilica at the top of Mount Tindari, fireworks and local processions. 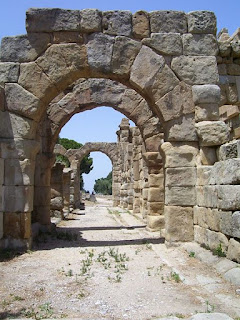 Part of the draw is the place of her shrine: Tindari, off the beaten tourist track, sits high on a rocky promontory with spectacular views. Founded by the Greeks in 396BC (by Dionysius the Elder, a nasty despot from Syracuse), the ruins of the city include an amphitheatre, the gates to the city, stone arches and tombs.

You can enjoy a picnic there without a Japanese tourist snapping a photo of you while you munch your sandwich (likely to happen in nearby Taormina).

But the interesting thing about the Madonna of Tindari are the stories surrounding her origins. Legend has it that the cedarwood statue was hidden on a cargo ship returning from the Middle East to save it from destruction during the Iconoclastic Wars. A storm blew up and the ship took refuge in the bay below Tindari. When the storm had passed, the sailors lifted the anchor and started rowing but the ship didn’t budge. They left some of the cargo on the shore, thinking that was the cause of the problem. Still no joy. It wasn’t until they left the Black Madonna on the shore too that the ship started to move again. Local fishermen found the statue and decided to build a shrine one the highest point of the plateau of Tindari.

Today, Tindari draws thousands of pilgrims and visitors every year.

Then there’s the miracle: the legend about the beautiful sandbank below the sanctuary, in the shape of a side profile of the Madonna and Child. The story goes that a woman brought her sick child to the sanctuary for a blessing but upon arrival, when she saw the Madonna was black, she refused to pray to her. The child slipped from her grip and fell over the cliff’s edge to the sea, hundreds of metres below. But instead of drowning, the child was found playing safely on a ridge of sand that miraculously rose out of the sea.

Finally, you have the theories about the Black Madonna in general, for the Madonna of Tindari is not the only one. Prevalent in Hispanic cultures from Guadalupe to Montserrat (there’s even one in Dublin in Whitefriar Street’s Carmelite Chapel), the mysteries of the Black Madonna are many. 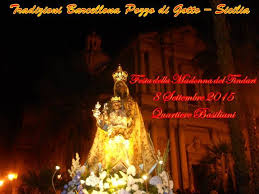 Some say she derives from a pre-Christian mother goddesss figure, linked to Demeter or the Egyptian goddess Isis. Others say that the dark skin tone of the Black Madonnas reflects that of the Virgin Mary, who likely had Semitic colours and features. She is often associated with miracles, always invoked as a protectress.

Our Black Madonna of Tindari sits on a throne, with the child Jesus on her lap, his hand raised in blessing. Inscribed on the base of the statue are words from the Old Testament’s Song of Songs: Nigra sum sed Formosa (I am black but beautiful).

Posted by Penelope at 9:34 AM No comments: