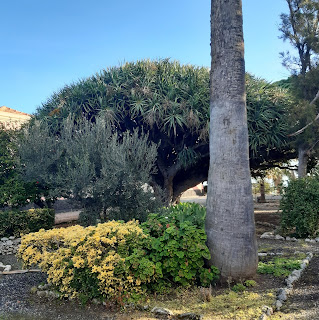 Imbolc is the Celtic festival of light which celebrates the coming to an end of dark winter months and the beginning of Spring. It coincides with La Féile Bride, St. Brigid's Day, a Christian festival based on the ancient pagan celebration of the goddess Brigid, just as Candlemas, or Candelora in Italian, is based con Imbolc. Brigid is the Celtic goddess of poetry and wisdom, fertility, protection and crafts and is often associated with the Roman goddess Minerva.  It was heartening to stumble across the Irish president's message from Uachtaran citing Brigid as an inspiration for Irish women: she had to summon up extraordinary courage in order to ensure her voice was heard in a male-dominated world. In her dedication to the realm of education she had to transcend obstacles in order to survive and put a "new version of things in place". Of course, any Irish person will know that there is good reason for the invocation of Brigid at this juncture in Irish governmen
Post a Comment
Read more 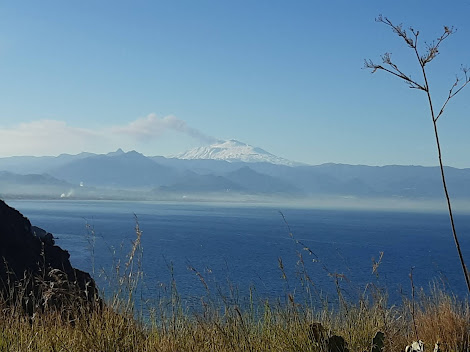 Etna as seen from Capo Milazzo   There are many reasons to want to leave Sicily. They grow in number when you have kids. A poor healthcare system, malfunctioning public services (Sicilians and expats alike DREAD going to the comune - council offices - for official documents), and an education system that leaves much to be desired. But there are as many reasons to stay, or maybe there are more. Etna is one of them. Etna is one the reasons Sicilians abroad wax lyrical about the Motherland and why they often find the pull to the homeland so powerful as to return. Catanese refer to the volcano as "la Montagna" such is their respect. Of course if you live in the province of Catania, you will have a daily view of the changing faces of Etna. If you go hiking in mountainous terrain in the north eastern part of Sicily, you can turn a corner and be surprised by a stunning view of Etna's peak. I consider myself lucky to be able to see Etna from the end of my street. Even though the
Post a Comment
Read more 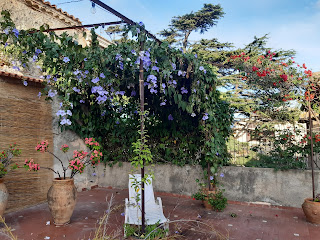 Lucky to be able to have lunch outside on a friend's terrace in these surroundings on 1st November. In Sicily...
Post a Comment
Read more 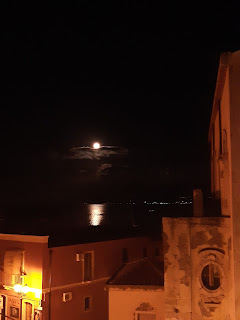 One of the things I like best about my house is that, at times I can see the moon rise from the east (levante) from my bedroom and the sun set in the west (ponente) from my kids' bedroom. Spectacular to look out the window and see this.
Post a Comment
Read more 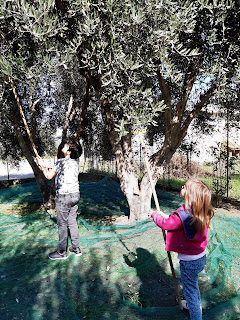 Harvesting olives - a fitting way to spend Samhain in Sicily.  My kids had fun for (all of five minutes) shaking the branches with rakes to loosen the hidden olives - camouflaged by the silvery leaves. But they found your neck gets sore staring up through the branches so they soon gave up the rakes and collected and sorted the olives into green and black piles. We didn't get enough to take to a frantoio - you need about 25kilos to get a decent about of oil, but we can dry them in soil to give them an earthy flavour, or just in the oven, then put them in jars with garlic, chilli, origano and a little oil, if we want to soften them up a bit. The olives were juicy and ripe - and released an amazing aroma of spicey fresh olive oil if split.
Post a Comment
Read more 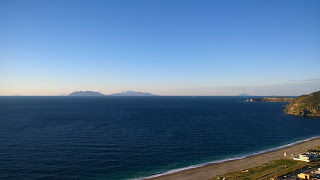 The government has released another decree in light of the increase in Covid cases, and tomorrow we are set to head back into lockdown mode, just like Ireland did last week. There's a crucial difference, in that schools in Ireland will stay open, whereas here, upper secondary schools (scuole superiori) will operate distance learning. For me that means my children will still have to go to school every day, but my teaching work will now take place online. Fun fun fun... Bars and restaurants must close at 6pm and gyms and public amenities are also on the list. But there are worse places to be under lockdown. I just hope they don't make the beach out of bounds as happened in April...
Post a Comment
Read more

The Eye of the Cyclops and the Black Madonna 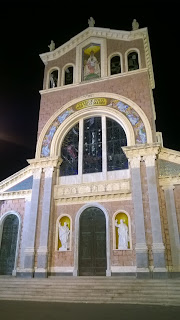 Only in Sicily an you find the such a compelling mix of folklore, religion and Greek myth. One of Sicily's best hidden gems, the Greek amphiteatre at Tindari, has just concluded its festival of Teatro dei Due Mari, and I was lucky enough to catch Il Ciclope, Euripides satirical nod to the Polyphemus episode in Ulysses... at sundown. And just in case that wasn't enough, the lore of the Black Madonna opened and closed the evening - the sandbank in the shape of the madonna's head on our way to the theatre, and the sanctuary of the Black Madonna in all its kitch shining glory as we left.
1 comment
Read more
More posts

The Irish Wanderer
The Irish Wanderer has been on the shaughraun for ten or so years in Sicily. She's collected stories and songs and is constantly inspired by Sicily and its many similarities with Ireland. She's run a restaurant, taught English in prison and written a novel set in Sicily. She's performed her songs in ancient castles and on the slopes of Etna. She's here to reveal some of Sicily's best kept secrets. Her motto: if it's authentic, it's good! Ammonini...